After the fall of Saigon on April 30, 1975, Vietnam became an unified country under control of North Vietnam’s communist government with Hanoi as its new capital. First of all, they decided to rename the country from Democratic Republic of Vietnam to Socialist Republic of Vietnam (SRV), explicitly indicating their desire to follow socialism and then communism. Besides, the People’s Revolutionary Party of South Vietnam was merged with Labour Party in North Vietnam and became Vietnamese Communist Party (VCP), the only one party in Vietnam. The VCP leader’s title was also changed from First Secretary, a term used by Chinese Communist, to Secretary General, used by Soviet Communist.

The VCP also implemented a so-called “Re-education” program which captured and imprisoned former military officers and government workers from the former regime of South Vietnam and even its supporters, civil servants, capitalists, priests as well. This program was seen as both a means of revenge as well as political repression and indoctrination. Between 1 to 2.5 million South Vietnamese were captured and moved to the so-called “re-education camps”. These “Re-education camps” were described like prison camps where people had to do hard physical work, some of it were very dangerous such as minefield sweeping, in spite of the shortage of food and medication. Without any technical knowledge and equipment, many prisoners were killed and wounded in minefield explosions. Although a lot of people died while working, starvation and disease were the major causes that take away prisoners’ lives. An estimated 165,000 prisoners died in those re-education camps. 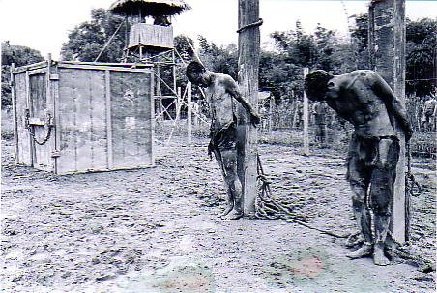 “New Economic Zones” was another program implemented by the communist government in the aftermath of the war. More than 1 million Northern Vietnamese migrated to the south and central regions formerly under the Republic of Vietnam during 1975-80. This program, in turn, displaced around 750,000 to over 1 million Southern Vietnamese and forcibly relocated them to uninhabited mountainous forested areas whose conditions were described by French journalist Jean Lacouture as “a prefabricated hell and a place one comes to only if the alternative to it would be death.” It is estimated that between 20,000 and 155,000 Vietnamese died performing hard labor in these “New Economic Zones”.

Under poverty, lack of economic freedom as well as harsh political policies and treatment of the new communist government, many South Vietnamese people tried to flee their fatherland. “Boat people” is a popular term referring to those refugees who fled Vietnam by boat and ship after the war. They were willing to risk their lives on some small, old and crudely built boats seeking for a better life away from their hopeless hometown. On the open sea, boat people had to encounter deadly storms, starvation, diseases and pirates as well. After long journeys up to 6 months, those who were lucky might succeed in landing on refugee camps set up by the United Nations Refugee Agency (UNHCR) around neighbouring countries. Unfortunately, a lot of them did not have that luck. An estimated of 200,000-400,000 boat people out of around 2 millions that fled died at sea. There were also a lot of untold miseries, maltreatment, murders and rapes committed by pirates at sea as well as the guards inside the camps.